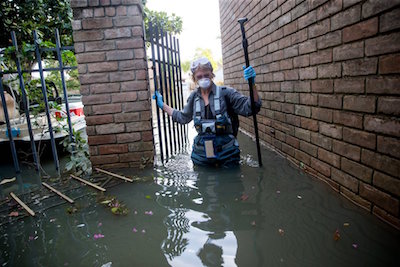 •  Sixteen people have died and 421 sickened in San Diego County between last November through September as a result of a Hepatitis A outbreak. About 65% of the infections occurred among the homeless or illicit drug user population. Hepatitis A is typically spread by ingestion of contaminated food or water and in rare cases, transmitted person-to-person through fecal-oral route.  Read More

•  Two neighborhoods in Houston have reported contaminated floodwaters containing bacteria and toxins that sicken people. The results of the testing found that the water contained Escherichia coli at a level more than four times the amount that is considered safe. Residents must take precautions to return safely to their homes.  Read More

•  A new bipartisan bill would build telehealth coverage into Medicare Advantage plans. This bill would encourage the use of telehealth technology to improve health care for seniors, particularly for those in rural parts of the country.  Read More

•  Eight elderly residents of the Rehabilitation Center at Hollywood Hills in Hollywood, Florida, died after a transformer that drove its air conditioning unit broke down, leaving residents vulnerable to the unforgiving heat and humidity. Health officials suspended the nursing home indefinitely and have moved 158 residents from the center to nearby facilities.  Read More