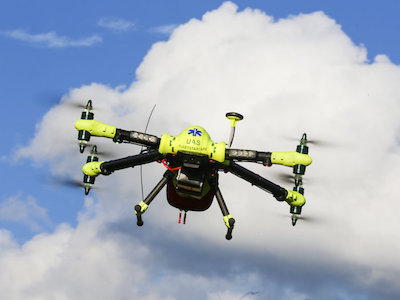 •  Indiana University's CEO, Dennis Murphy, is taking a new and more interactive approach to the annual "state of the system" address. He's meeting with IU clinicians and staff members face-to-face at various IU Health facilities, hoping to learn more about staff members' concerns while communicating his vision for the system. This active listening and in-person engagement approach by health care leaders has been proven effective in improving patient and staff satisfaction.  Read More

•  A new study published in Occupational and Environmental Medicine found that noise increases the risk of hypertension. Greek researchers studied 420 people living near an airport and tracked their noise exposure. They found that over the next decade after the study began, there were 71 newly diagnosed cases of high blood pressure. This adds to the nearly half of the study population already diagnosed at the start of the study.  Read More

•  We've heard of drones dropping off packages and food orders directly to customers' doors. But what if drones could do more than simply deliver accoutrements of leisure? Researchers in Sweden have been testing out drone deliveries of automated external defibrillators to cardiac arrest patients. While there is still more research to be done, so far the drones have beat the median response time of ambulances to reach patients in out-of-hospital cardiac arrest situations.  Read More

•  Some health care organizations are still running on outdated systems or browsers, remaining vulnerable to malware attacks, such as that of WannaCry on May 12.  Many of these organizations simply can not update due to lack of funding. In an unprecedented move by Microsoft, security patches were released to these out-of-date systems, recognizing the elevated risk of such cyberattacks, where normally such patches would not be released for technology the company no longer supports.  Read More