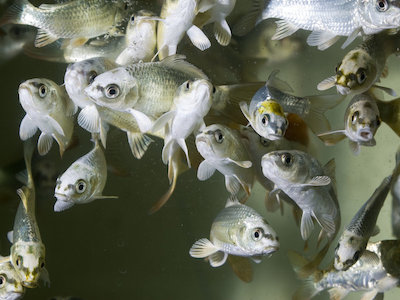 • Wearable technology and data analytics are changing the face of employee health plans. As employee wellness becomes more and more a part of corporate culture, health insurers must now compete with wellness programs and more tech-heavy newcomers that offer the appeal of health gadgets and mobile apps. Looks like these established players need to "get with the program". Pun intended. Read More

• We all associate fevers with wasting away in our beds with aches, pains, and the yearning for chicken noodle soup. And yet, while fevers conjure negative sentiments, they're actually an ancient survival method in fighting infection. Studies involving sick carp recently brought to light a phenomenon called "behavioral fever", in which infected carp consciously move towards warmer water to fight infection, similar to how a fever fights infection in the human body. Read More

• On Wednesday, the Government Accountability Office released a report citing that doctors and hospitals failed to tell the Food and Drug Administration about cases in which a surgical tool, used to operate on the uterus, spread cancer around inside women's bodies. For 20 years, the power morcellator was used on patients to remove benign uterine tumors called fibroid. This tool can spray malignant cells around inside the abdomen and pelvis like seeds, worsening the disease. Read More

• Despite promises of replacing the Affordable Care Act within the first 100 days of his administration, Trump has yet to have an ACA replacement plan in place for this year. According to a Congressional Budget Office report released in January, repealing the ACA without a replacement could leave more than 30 million people uninsured by 2026. Read More