The Greatest Battle Of Our Time
Siavosh Bahrami
Sometime after 2008, folks all over the country started having heated arguments with friends and family about some fundamental issues that were facing our world. A lot of times it seemed like they were talking past each other, completely frustrated with why the other side just didn’t see what they considered to be completely obvious and self-evident. Friendships were strained and Thanksgiving dinners became even more awkward. Unfortunately, cool-heads have not prevailed. The lack of communication has increased, and the volume of discourse has only gotten louder. I’m not talking about politics or religion, but the smartphone battles that began with the unveiling of the first iPhone and Android smartphones -- which platform is superior? Years later, we still wonder: Can there be a resolution, and peace in our time?

The global market share numbers seem to indicate that the debate should be over. Android’s current global smartphone market is almost 80 percent according to some reports, leaving iOS to roughly only 17 percent of the market. If the numbers paint such a clear picture, then why doesn’t it feel like we all live in a peaceful monopolistic world of Android? The answer may be that although 80 percent of the market is dominated by one platform, it’s not a homogenous domination, and there are gritty pockets of resistance. Your grandmother’s sewing club, for example, may be diehard Android users while the juniors at Jefferson High can’t fathom anything other than an iPhone. The enterprise world is one such niche, and one that Apple still clearly dominates. A recent report puts iOS at over 73 percent of enterprise users with Android being a lowly 26 percent.

Does the medical world follow the enterprise breakdown? At pMD, we deal with mobile charge capture software, and we’re in a unique position to try to answer this. Based on today’s numbers, our device breakdown is even more skewed than the national numbers in favor of Apple. Currently, health care providers prefer Apple over Android devices to the tune of 92 to 8 percent. 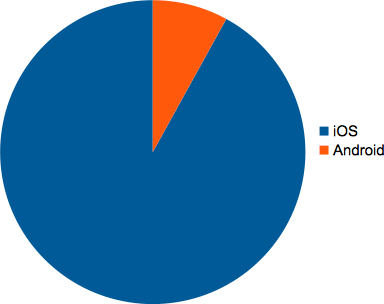 We can also answer whether we’re seeing iOS users flocking to Android or vice versa. From the data, it doesn’t seem so. Only 1-2 percent of pMD charge capture users have switched sides. 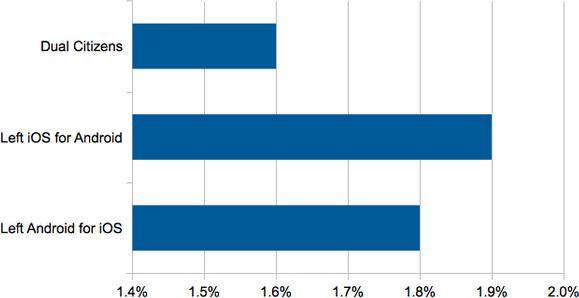 Even more rare are the users who are “Dual Citizens,” those actively using both Android and iOS devices. Sadly, the voice of compromise is nowhere to be found. Only 1.6 percent of users have both types of devices, making them quite rare and exotic. If you see them, take a picture.

Where does all this leave us? Well, it would seem that if you’re targeting the medical mobile world and you have to pick one platform to support first, iOS should be it. Yet, that may be too simplistic as most medical apps are inherently social and you would ideally need to support both out of the gate.