• The Centers for Medicare & Medicaid Services (CMS) released a quality and financial performance report this week for Medicare Accountable Care Organizations (ACOs). The results show that ACOs are continuing to improve the quality of care for Medicare beneficiaries, as well as generating financial savings. ACOs are groups of doctors, hospitals, and other health care providers who come together to provide coordinated care, with the goal of giving Medicare patients – especially the chronically ill – the most appropriate care at the right time, while avoiding unnecessary duplication of services and preventing medical errors. Source

• A federal report released this week showed that the nutritional profile of school meals in the United States had improved substantially since higher government standards went into effect in 2012. Nearly 80 percent of schools offered two or more vegetables per meal in 2014, up from 62 percent in 2000. Two or more fruits were offered in about 78 percent of schools, up from 68 percent in 2000. About a third of schools now have salad bars. The rules put into effect in 2012 included increasing the availability of fruits, vegetables, whole grains, and fat- free and low-fat fluid milk in school meals, as well as reducing the levels of sodium, saturated fat and trans fat in meals. Source

• CVS announced that it is partnering with three telehealth companies – American Well, Doctor On Demand and Teladoc - to explore how direct-to-consumer telehealth providers, retail pharmacy and retail clinic providers can collaborate to improve patient care. This represents an expansion of CVS Health's existing telehealth approach. The plan is to provide telehealth care to patients in CVS retail stores and serve as a site for in-person exams to facilitate telehealth medical visits. Source

After positive growth last week, Apple took a 0.07 percent hit from Android in net mobile devices among pMD's physician users this week. Rumors around the iPhone 6S are suggesting a Sept. 9 debut; if the rumor mill pans out, we may see Apple gain back some of the market share as excitement builds around the next generation device. 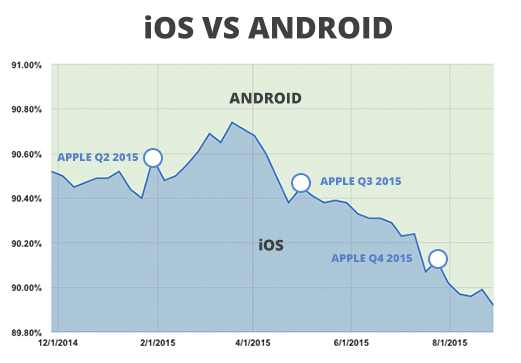