•  Democratic presidential candidate, Hillary Clinton, proposes to give Americans younger than age 65, starting at age 50 or 55,  the option to buy into the Medicare program. Questions arise on how this will align with existing insurance coverage options. There are an estimated 7 million, or 11 percent of those age 50 and over that remain uninsured as of 2014. Source

•  The CDC (Centers for Disease Control and Prevention) reports this week that the percentage of cigarette-smoking adults aged 18 and over have decreased in 2015, down to 15.1 percent versus 16.8 percent in 2014. This significant decline comes as the use of e-cigarette devices increases, especially among teenagers. Source

• CMS (Centers for Medicare & Medicaid Services) will soon launch a series of "Hospital Improvement and Innovation Networks" (HIINs) to strengthen patient safety and quality of care as well as to reduce readmissions. The aim of HIINs will be to reduce patient harm by 20 percent and cut readmissions by 12 percent over the next three years. Source

For the fifth week in a row, Android has topped Apple in net devices, taking away a whopping 0.09 percent of the mobile user base. Could the new Samsung Galaxy S7 edge Injustice Edition be drawing in enough Batman fans in our physician pool to keep driving these numbers up? 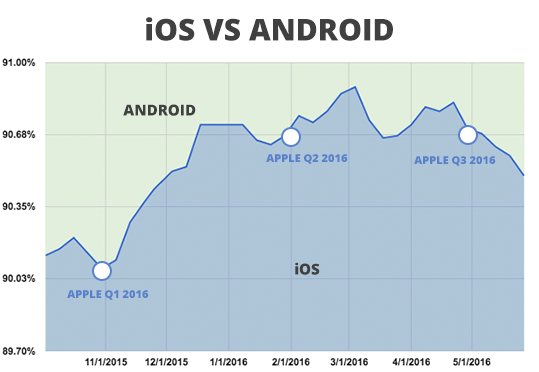