• A survey conducted by Health Catalyst revealed that only 3 percent of the health systems today meet the target set by CMS (Centers for Medicare and Medicaid Services) for providing value-based care for patients. Only 23 percent expect to reach that goal by 2019. The survey also shows that 62 percent of health systems have zero to less than 10 percent of their care tied to value-based care and payments, and those numbers include accountable care organizations. Health Catalyst gathered opinions from 78 healthcare professionals who responded to the online survey in May 2016, more than half of which were CEOs or CFOs. Source

• On Monday, California Governor, Jerry Brown, signed California's right-to-die bill into law. This law allows terminally ill patients who are given six months or less to live by two doctors to end their lives with the aid of their physician.  The patient must also provide a written request and two oral requests at least 15 days apart and must be deemed mentally capable of making decisions about their own health. The law will go into effect next year. Source

• Medical costs are projected to increase next year by 7.5 percent for people buying insurance under the Affordable Care Act according to The Geisinger Health Plan. One proposed solution? Increasing insurance rates by 40 percent for 2017. However, the Obama administration officials are optimistic that proposed rate increases are often reduced by state officials and in any case, consumers can always switch to cheaper health plans the next year. Source

After six excruciating weeks of battling it out with Android, Apple is finally back on top.  This week Apple took a sweet 0.04% piece of the mobile device pie from Android. Could the impending release of the Apple watchOS3 be enticing enough to sway Android users to make the switch? 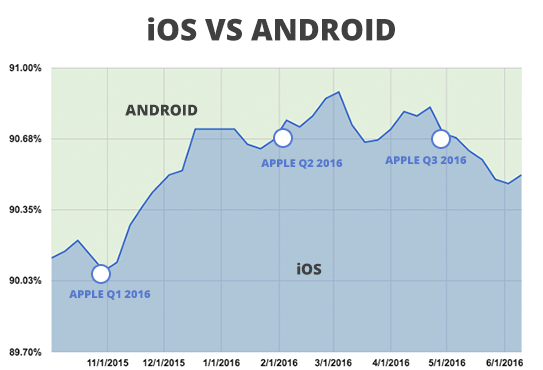