• The Department of Defense is soon rolling out a new electronic health records software in the Pacific Northwest later in 2016. This project is going to be a new beginning towards interoperability and secure patient records. This massive EHR modernization by the DoD now has a new name - MHS Genesis. The project is in partnership with Cerner, Leidos and Accenture and this "new beginning" will soon hope to provide greater population health data, tracking and alerting capabilities, which will also enable health care professionals to more easily monitor patients' health status and encourage healthy behaviors. Source

• Veterans Affairs' medical facilities are under investigation after officials in seven states falsified wait-time records. Evidence of misconduct was found in dozens of states after the discovery of falsified wait-time records at the Phoenix VA facility nearly two years ago. It was reported that the VA environment encouraged or provided incentives for such misconduct and in other cases, the mandates to manipulate wait times were found to come from higher level administration. The department has initiated disciplinary proceedings against 29 employees. Source

•  A new federally led task force aims to crack down abuse in nursing homes. Federal, state and local authorities will collaborate in 10 new regional task forces across the country to toughen enforcement against substandard care to patients and residents in nursing homes. The U.S. Justice Department announced on Wednesday that the task forces hope to "share information and concerns much more quickly and to take action in a more coordinated and timely manner". Source

For the second week in a row Apple has topped Android in net devices for the week, taking away an additional 0.08 percent of the mobile user base. Perhaps there's a correlation between Apple's growth and the new, polished, developer's portal - making things a bit easier to find and giving developers a shiny, redesigned website to work with. 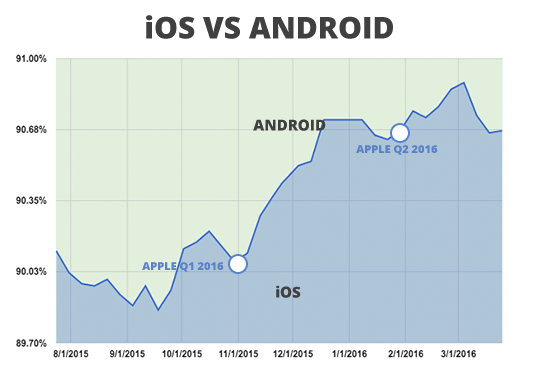