• The NIH and ONC for Health IT have launched a new pilot program that will allow individuals to donate their health data to researchers. Sync for Science, or S4S, is a coordinated project between NIH, ONC, Harvard Medical School Department of Biomedical Informatics and EHR vendors Allscripts, athenahealth, Cerner, drchrono, Epic and McKesson. Once developed and implemented, patients will be able to connect a research app to their electronic health data, facilitating data donation on an individual basis. The two goals for S4S's pilot are to make it easier for patients to share clinical data with the PMI Cohort in a structured, electronic format and also to build up a national ecosystem for patient-mediated data access through APIs. Source

• A bill was introduced this week to delay the implementation of a Medicare bundled payment program, which was set to take into effect next week. The bill would push the implementation date to January 2018. The Medicare bundled payment program requires hospitals in nearly 70 regions to accept bundled payments for hip and knee replacements, meaning there would be one price per patient that includes procedure and follow-up care and projects savings of about $343 million in the next five years.  Delaying the start of the program would allow the providers and stakeholders involved to be given ample time to prepare for the change and to better protect the quality of patient care. Source

•  FDA now requires a "black box" warning for all prescription opioid painkillers, the strongest of FDA's warnings, which is meant to educate doctors as they're prescribing medications to patients. These warnings include information about the risk of abuse, addiction, overdose and death. When a patient receives their prescription, the bottle should have a notification indicating that there is a black-box warning for the drug. The consumer will then need to go to the manufacturer's website for details. Pharmacists are highly encouraged to provide patients with a medication guide in consumer-friendly language explaining the risks of the drug. Source

Apple gained 0.01 percent this week in the mobile device wars against Android among pMD's charge capture physician users. Reports of issues with Apple's latest software update, iOS 9.3, have surfaced, including an activation bug affecting users of older iPhones and iPads. Apple confirmed existence of the bug and has released an updated version of iOS 9.3. 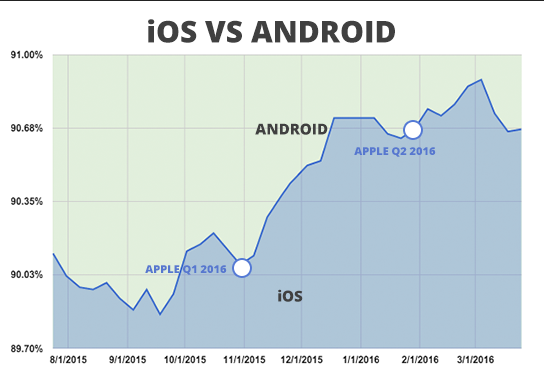