• Starting March 27, physicians operating in New York will be required to transmit all prescriptions digitally and will be penalized for continuing to use paper script pads. Penalizations can range from hefty fines to even possible imprisonment. Under the I-STOP, or Internet System for Tracking Over-Prescribing Act Legislation, electronic prescription of drugs is being mandated in order to combat controlled substance abuse. Another added benefit of e-Rx is the hope of improving patient safety by removing sloppy handwriting and missed or inaccurate information. All practitioners, excluding veterinarians, must issue electronic prescriptions for controlled and non-controlled substances. Source

•  TV003, a new type of dengue vaccine, has been found to protect people against at least one type of the virus, representing a big advancement in controlling the most common mosquito-transmitted virus worldwide. Researchers are now testing whether the TV003 vaccine can protect people from the three other types of dengue virus. Another vaccine, Dengvaxia, recently became available in Latin America and Asia, but may be inappropriate to use in countries such as the U.S. as many of the cases in Latin America and Asia involve a population that may have already been exposed to the dengue virus before. Source

Apple took back to back hits these past two weeks, most recently losing 0.08 percent of the market share in the mobile device wars against Android. There's been much speculation around Apple's media event on March 21, where Apple will be unveiling a new 9.7 inch iPad and a 4 inch iPhone. Given Apple's recent downturn among pMD's charge capture niche, users may be holding out for Apple's September event, when Apple typically announces more highly sought-after products, including the redesigned iPhone 7. 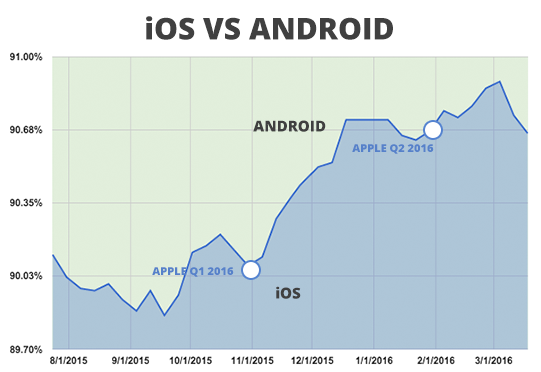