• Researchers at the University of Michigan and two New Jersey Hospitals are doubling up on efforts to fight "superbug" Clostridium difficile (C.diff). C diff is a bacterium that can cause symptoms ranging from diarrhea to life-threatening inflammation of the colon and often presents in patients as a hospital-acquired infection. It is one of the deadliest and expensive challenges currently facing the health care profession. Newly announced initiatives are aimed at limiting the spread of C. diff throughout health care facilities such as hospitals and local nursing homes. The University of Michigan announced a $9.2 million initiative to fight C. diff, while hospitals across the nation plan to share best practices and protocols in an effort to reduce the spreading of C. diff from institution to institution. Source

• The Million Hearts EHR Optimization Guides, released by The Office of the National Coordinator (ONC) this week, aim to help health systems put their Electronic Health Records (EHRs) to work identifying at-risk patients in order to protect them from future cardiovascular events. The initiative aims to prevent 1 million heart attacks and strokes by 2017. The guides will direct clinicians on how to use their EHR systems to find and improve data on cardiovascular health management, such as aspirin therapy, blood pressure control, cholesterol management and smoking cessation.  Source

•  The Obama administration is testing new ways to pay for prescription drugs in order to slow the growth of Medicare spending on medicines. Doctors are also encouraged to choose the most effective treatments for their patients. Several proposals are in place to create higher incentives for doctors to choose the lowest-cost therapy to effectively treat patients. The current Medicare payment methods reward doctors and hospitals based on the average sale price of a drug and 6 percent, which incentivizes doctors to prescribe higher-priced drugs, which can then generate more revenue. The administration will be accepting public comments on the proposals until May 9. Source

Apple took a deep hit this week in the mobile device wars against Android, losing 0.15 percent of the market share among pMD's charge capture physician users. Apple sent invites to its upcoming media event, Let Us Loop You In, on March 21. Apple will be revealing several new products at the event, including the new 9.7 inch iPad, the 4 inch iPhone SE, and new Apple Watch bands. 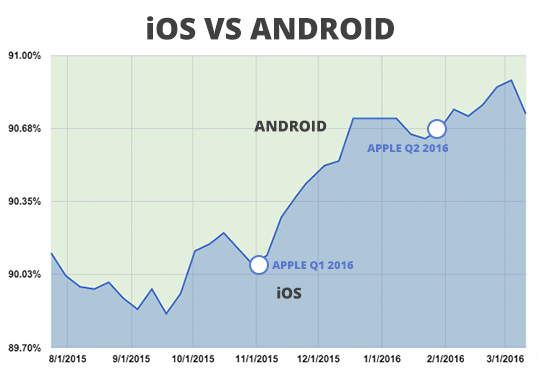