• A new study in the medical journal, JAMA Internal Medicine, reported that patient prices increase after hospitals acquire small private doctor practices. The study looked at the cost and volume of health-care services as physicians became more integrated into hospitals and found that patients pay an average of $75 more every year for outpatient services like check-ups, even though the number of appointments stays the same. Hospital employment of doctors and ownership of physician practices has grown over the past decade. Source

• Controversy around Theranos, a blood-testing start up, emerged when articles published in The Wall Street Journal questioned the accuracy of the company’s blood tests and the extent to which Theranos is actually using their unique technology. CEO Elizabeth Holmes attended a live onstage interview at The Wall Street Journal this week to defend the accuracy and utilization of the technology, alleging that the company uses proprietary lab equipment to deliver results much faster and more cheaply than traditional blood tests. Source

• Medical schools reported record-breaking application and enrollment totals from college students this fall, according to the Association of American Medical Colleges. Enrollment increased 1.4% to 20,630 in 2015 from 20,343 last year, and medical school applications saw a 6.2% increase to 52,550 this year from 49,480 in 2014. The problem that remains is that the number of medical residency training positions has not grown at the same pace. Source

After riding a four week hot streak, Apple finally lost market share to Android this week with a 0.07 percent loss among pMD's physician users. Apple also released numbers around the status iOS 9 updates this week, revealing that 61% of devices are using iOS 9 since the new operating system was released on September 16. All eyes are set on Apple's Q4 earnings report this Tuesday. 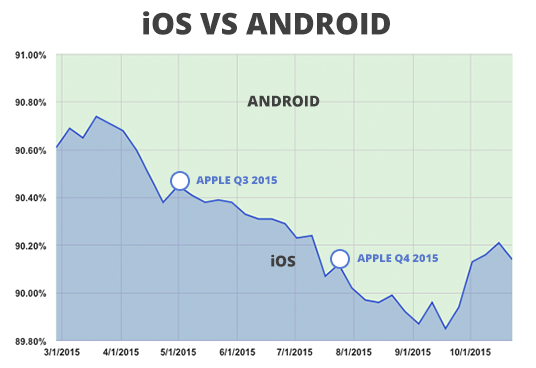