• CMS released metrics on the performance of ICD-10 claims submitted from October 1 through October 27 and found that of the 10 percent claims rejected, only a fraction were due to coding issues. 2 percent of claims were rejected due to incomplete or invalid information. Before the transition, CMS had said it would not reject claims as long as they were coded using the correct ICD-10 family. Medicare claims take several days to be processed and, by law, Medicare must wait two weeks before issuing a payment. Source

• The World Health Organization reported that processed meat like hot dogs, ham, and bacon is carcinogenic to humans, while consumption of red meat was classified as “probably carcinogenic.” In its study, the World Health Organization’s International Agency for Research on Cancer (I.A.R.C.) concluded that each 50-gram portion of processed meat eaten daily increases an individual’s risk of colorectal cancer by 18%. The report also suggested that high-temperature cooking methods generate compounds that may contribute to carcinogenic risk. Source

• Walgreens announced that it has agreed to buy Rite Aid for approximately $9 a share, in a deal worth about $17 billion. Antitrust experts say the Federal Trade Commission will look closely at whether the merging of the number one and number three pharmacy chains in the U.S. will lead to higher prices for prescription drugs and pharmacy services, which would be particularly consequential for cash-paying customers. Source

Apple is down 0.07 percent this week in the iOS-Android mobile device wars among pMD's physician charge capture users. Users may be distracted with other Apple products: Apple started selling its fourth-generation revamped Apple TV, equipped with a Siri Remote voice input and touch surface trackpad. 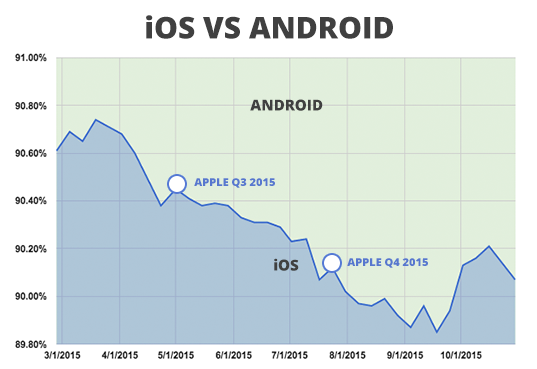