• Kaiser Permanente, the nonprofit insurance company with its own integrated hospitals and clinics, announced that it will open an independent medical school in Southern California in 2019. Leaders in the organization say they want to bring Kaiser's "21st century medicine" model of integrated care to a broader audience by teaching the future generation of doctors. The medical school would be one of the first to be run by a health system without an academic partner. Source

• A new study found that nearly one-third of doctors who are in the early stages of their medical career suffer from depression or have symptoms of depression during their training. The study was conducted globally but the research found no statistically significant difference among the prevalence in U.S. studies vs. elsewhere, between medical specialties, or between men and women. Depression among residents has been linked to poor quality care and increased medical errors. Source

• Rising obesity rates among the elderly are causing problems among U.S. nursing homes, who often don't have the resources to provide complete care for large numbers of obese patients. Medicaid, which covers more than 60 percent of all nursing home residents, does not reimburse nursing homes for the specialized equipment required, including motorized lifts, larger wheelchairs, bedside toilets and shower chairs, and longer intramuscular needles and blood pressure cuffs. However, unlike emergency rooms, nursing homes are not required to admit patients. Source

Apple rounded out the week with an impressive net 0.19 percent growth over Android in mobile devices among pMD's physicians charge capture users. With Christmas just one week away, we can speculate what physicians put on their wish-lists this year! 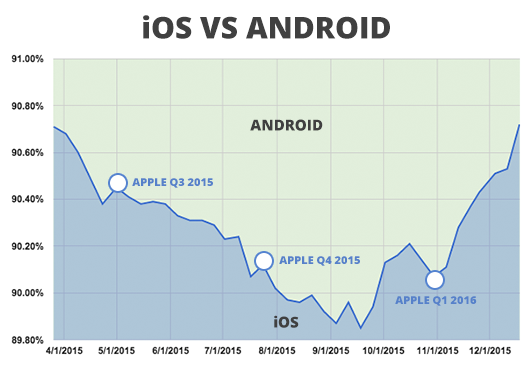