• Physicians who practice defensive medicine, or ordering extra procedures and tests, are less likely to be sued for malpractice, according to a recent study published in BMJ. The study, which contains data from nearly 25,000 physicians, shows that the 20 percent of general surgeons who billed the least had a 2.3 percent rate of malpractice claims, whereas the 20 percent of surgeons who billed the highest had a malpractice claim rate of only 0.4 percent. These trends were similar across all specialties. Source

• Two of CMS' Pioneer Accountable Care Organizations (ACO) dropped out of the program this week, leaving approximately half of the original 32 Pioneer organizations in the program since 2012. The latest two to leave are Mount Auburn Cambridge Independent Practice Association and the Steward Health Care System. ACOs earn bonuses or face penalties based on whether spending for their patients is lower or higher than a target set by CMS. Source

• Researchers at the George Washington University (GWU) Health Workforce Institute released analysis this week disproving recent news reports that the number of medical school graduates would soon outnumber available residency positions. The GWU report found that in 2014, there were 6,837 more available first-year residency positions than there were graduates of all United States medical schools; they expect this number in 2024 to be 4,608. Source

Apple increased its presence by 0.04 percent this week in the mobile device market among pMD's charge capture physicians. Apple also debuted a new "Shopping" category to the App Store that combines mobile banking, marketplace, and coupon apps, including those that accept Apple Pay. 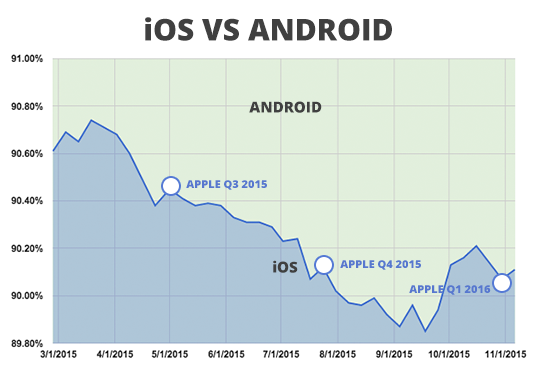