• A study by Stanford researchers found that doctors who are sued in malpractice claims are more likely to get sued again. According to the study, just one percent of all doctors account for nearly one-third of all paid malpractice claims. More than half the claims were by doctors in four areas: internal medicine, obstetrics and gynecology, general surgery and general practice/family medicine. Source

• Nearly 75 percent of office-based physicians had adopted a certified EHR system in 2014, according to the annual Centers for Disease Control and Prevention’s National Electronic Health Records Survey. The percentage of physicians who had a certified EHR system ranged from 58.8 percent in Alaska to 88.6 percent in Minnesota. Just over 30 percent of the EHR systems were electronically sharing patient health information with external providers. Source

• The head of the World Health Organization announced that the Zika virus, which is linked to birth defects and brain damage in newborns, is spreading at a rapid rate in the Americas. Officials estimate that as many as four million people could be infected by the end of the year. The CDC has urged pregnant women against travel to two dozen countries in Latin American and the Caribbean, where the diseases is spreading the fastest. Source

Apple claimed 0.04 percent of the mobile device pie this week among pMD's physicians charge capture users. Apple also reported on its fiscal first quarter earnings on Tuesday. Although Apple beat estimates on earnings per share and bottom line, it fell short of expectations of 75 million iPhones shipped (coming in at 74.78 million units, up from 74.5 million units in the same period last year). Cook said on the company's earnings call that he expects iPhone unit sales to decline in the fiscal-year second quarter, so we'll be closely monitoring pMD's device trends to see if that hypothesis holds true in the medical market. 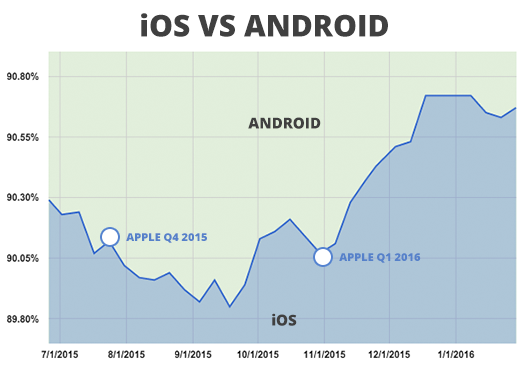