• The government announced this week that there will be no cost-of-living increase to Social Security benefits in 2016 despite potential record increases to premiums for nearly one-third of Medicare beneficiaries. The Obama administration is urging Congress to curtail the health insurance premium increases, which could raise the cost for some Medicare beneficiaries by about 50 percent. Source

• A new report estimates that cyberattacks will cost US health systems $305 billion over the next five years in lifetime revenue. The study, led by Accenture, estimates that one in 13 patients will have personal information, such as social security or financial records, stolen from health technology systems. Researchers used historical security breach data from the US Department of Health and Human Services Office for Civil Rights to project the number of patients likely to be affected by healthcare provider data breaches from 2015 through 2019. Source

• This week marks the two-week milestone with no major disruptions since ICD-10 was implemented on Oct. 1. Many of the large national payers had minor issues in the first week, especially on claims where a patient stay began in Sept. and ended in Oct. requiring both ICD-9 and ICD-10 codes. Health care groups who had been coding in a dual ICD-9 and ICD-10 list before the transition saw less of an impact on coder productivity. Source

This week Apple saw a net increase in mobile market share among pMD's charge capture providers, gaining 0.05 percent against Android. Apple has been on a hot streak ever since the release of the iPhone 6s three weeks ago. 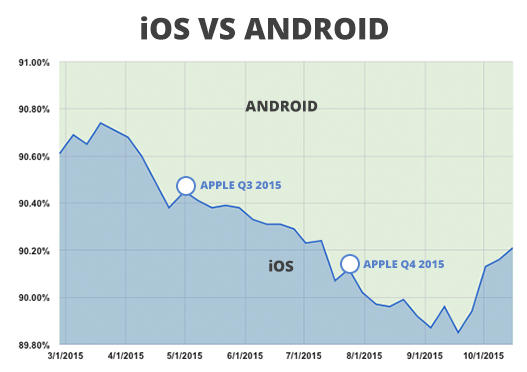