• Hollywood Presbyterian Medical Center paid a ransom this week to a hacker who seized control of the hospital's computer systems earlier this month. The hacker demanded 40 bitcoin, the equivalent of about $17,000. The attack prevented staff from logging into the hospital's system and forced the hospital to return to pen and paper for record-keeping. The hospital said that patient care was not compromised, and the FBI is investigating the incident. Source

• CMS released a proposal for an increase of an average of 1.35 percent in payments to health insurers who offer Medicare Advantage and Part D programs, which provides health benefits to more than 17 million elderly or disabled people. The change would take place in 2017 and is a major shift from last year, when initial rates were cut by an average of 0.95 percent. Source

Apple won back 0.05 percent of the mobile market share from Android this week among pMD's charge capture users. Apple has been in the spotlight lately after it refused orders from the government to decrypt an iPhone that was owned by an attacker in the San Bernardino shootings. The public has largely sided with Apple in this battle, agreeing that it would set a dangerous precedent and could undermine the security of Apple's devices. 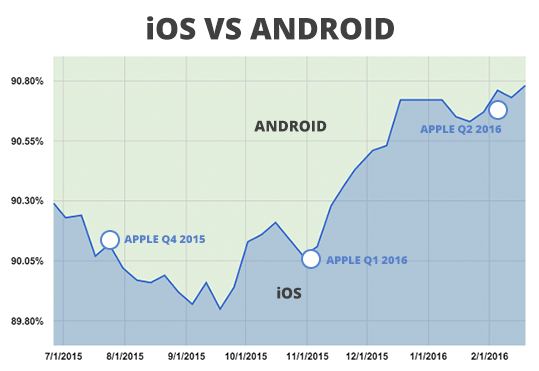