• A new report found that poor communication among physician practices and hospitals was a factor in nearly 2,000 patient deaths and incurred approximately $1.7 billion in hospital costs. The report listed the most common breakdowns in communication, including miscommunication about a patient's condition, inadequate informed consent, poor documentation and an unsympathetic response to a patient's complaint. Source

• The Centers for Medicare & Medicaid Services (CMS) proposed a new rule this week that will give health care providers and their employers access to de-identified claims information in order to improve patient care quality. Under the new rule, qualified organizations can share or sell Medicare and private sector claims data to providers, employers, and other groups who can use the data to support improved care. Source

• The Obama administration announced that approximately 12.7 million people signed up for health insurance under the Affordable Care Act or had their coverage automatically renewed in the third annual open enrollment season. The health care signups exceeded expectations, with four million new members to the federal insurance marketplace. The three-month open enrollment period began November 1 and ended on Sunday. Source

This week Apple took 0.09 percent of the mobile device pie from Android among pMD's mobile charge capture physician users. Apple also publicly acknowledged an unusual "Error 53" message that iPhone 6 users were reporting, triggered by updating to iOS 9 or later after having the phone's Touch ID sensor fixed by an unofficial technician. The Error 53 issue essentially renders the iPhone unusable. 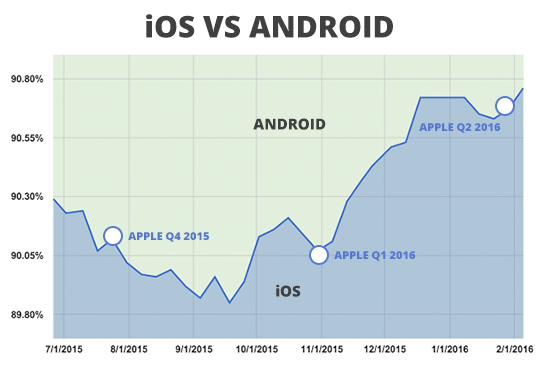