• PowerWare is the latest example of recent ransomware attacks on hospitals across the U.S., wreaking havoc on health care. Similar to the Locky virus, the fileless malware is delivered via email through a Microsoft Word document that resembles an invoice and locks down the system until the ransom is paid. In addition, PowerWare takes it a step further and mimics legitimate activities and files on the computer. Many times, ransomware is successful because organizations have a same file sharing system and depository for all documents across the organization and it only takes one employee to be fooled.  Source

• The FDA approved an experimental blood screening test on Wednesday for the Zika virus in blood donations. The approval for the experimental test is a response to a blood donation shortage in Puerto Rico, where fear of spreading the virus halted local donations. Puerto Rico will be able to start collecting blood again within a week or two thanks to the green light from the FDA. The test is still under investigational use. Source

• The Obama administration announced a proposal this week that would allow physicians to issue more prescriptions for buprenorphine, which is a mild narcotic used to wean users off heroin and prescription opioids. The proposal aims to increase access to medication-assisted treatment for tens of thousands of people with opioid use disorders, provide behavioral health support, as well as double the current cap of the number of patients to whom a doctor can prescribe buprenorphine from 100 to 200.  Source

This week Apple took a sweet 0.05% piece of the mobile device pie from Android, adding to their already dominating presence in mobile health care. The iPhone SE was launched this Thursday, bringing in crowds of loyal apple consumers in some major cities ranging from Sydney, Australia to Miami, Florida while other cities experienced no queues. The launch of this low-cost smartphone sparked mixed reactions but is expected to be particularly popular in emerging markets. 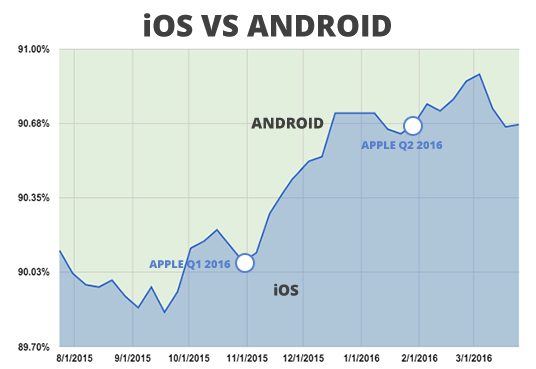