• For the first time in the last decade, the death rate in the U.S. has risen, driven in part by deaths due to overdose, suicide and Alzheimer's Disease. According to the National Center for Health Statistics, the death rate rose to 729.5 deaths per 100,000 people in 2015, up from 723.2 in 2014. The increase in death rate on a national scale is surprising and concerning, especially when other countries in Europe are showing signs of declines in mortality. Source

• Doctors at the Cleveland Clinic remain optimistic about the controversial procedure to transplant a uterus after the first attempt failed in February. 26-year-old Lindsey McFarland, who was born without a uterus, became the first woman to undergo the procedure but had to have it removed within a few weeks due to infection and severe bleeding. Doctors who are conducting these studies to improve the uterine transplant procedure defend what they're doing, even though the procedure may come with physical and psychological ramifications. Source

• While MACRA (Medicare Access & CHIP Reauthorization Act of 2015) is working to progress health care towards a more quality-driven model, it's becoming clear that complex EHRs may be hindering physicians at the point of care. Different systems don't talk to each other, limiting the integration and data sharing meant to supposedly improve the management of population health. Recent updates in Meaningful Use and MACRA legislation regulations reflected the ineffeciencies and loss of usefulness from overly complex EHRs. Source

For the sixth week in a row, Android beat Apple in total devices this week, however with a narrowing lead of only 0.02%. Looks like Apple could be making a comeback in style! 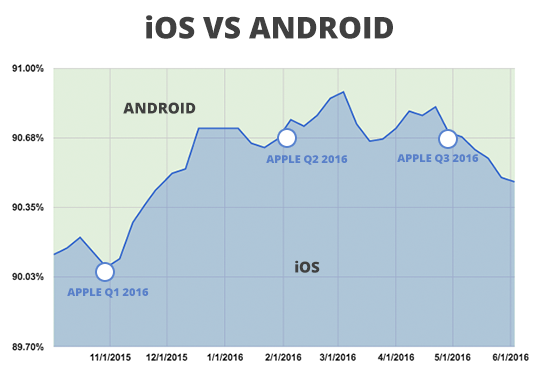