• A new study suggests that remote telemedicine among patients with heart failure has not decreased hospital readmissions compared with patients discharged from the hospital and treated with usual in-clinic care. Telemonitoring included a Bluetooth-enabled weight scale and blood-pressure/heart-rate monitor integrated with a text device that sent the information to a centralized call center for review. The study was conducted by Better Effectiveness After Transition-Heart Failure (BEAT-HF) and presented at a American Heart Association (AHA) meeting. Source

• Federal health officials reported that obesity rates have continued to rise in recent years despite efforts to fight it. Figures from the National Health and Nutrition Examination Survey revealed that approximately 38 percent of American adults were obese in 2013 and 2014 and obesity among young people was unchanged. Source

• Google Life Sciences and the American Heart Association announced a five-year, $50 million partnership to bring new and innovative approaches to the causes, treatments, and prevention of heart disease. The collaboration will support research by a team of medical, engineering, and technology professionals and will attempt to prevent and reverse the development of coronary artery disease. Source

Apple jumped up a whopping 0.17 percent this week in the iOS - Android mobile device wars among pMD's charge capture physician users. This is the largest increase for Apple over the last quarter. Users are also able to get their hands on the new iPad Pro more easily now that Apple announced increased availability for the device, which supports a Smart Keyboard and Apple Pencil. 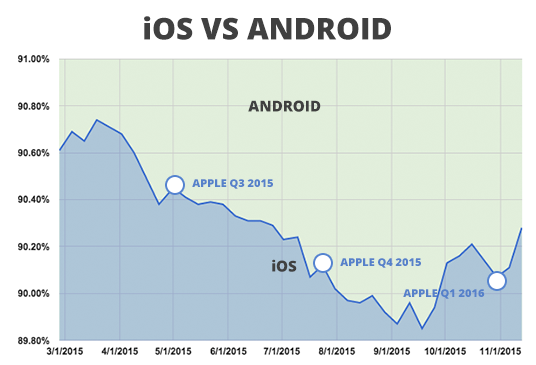