• New cases of Ebola emerged in Liberia this week, two months after the country was declared free of the disease in September. The infected patients include a father and his two children, who were taken to an Ebola treatment center. Guinea was previously thought to be the only nation that still had active cases of Ebola, which has killed around 11,300 people in the latest outbreak. Source

• Two ongoing studies to determine the patient impact of long work shifts for doctors have been criticized as unethical and done without the informed consent of the patients, according to complaints sent to the Department of Health and Human Services (HHS). One study assigns first-year medical residents from internal medicine programs to up to 30 consecutive hours, exposing patients to greater risk of harm. Currently, first-year residents are limited to 16-hour shifts and other residents to 24-hour shifts. Source

For the third week in a row Apple has topped Android in mobile device market share, gaining an additional 0.09 percent of the user base among pMD's physician charge capture users. Despite the strong performance by Apple, software developers of iPad Pro pro apps are complaining that Apple’s App Store policies are a barrier to them creating iOS versions of popular Mac app, so it's unlikely we'll see many new apps optimized for the iPad Pro for the time being. 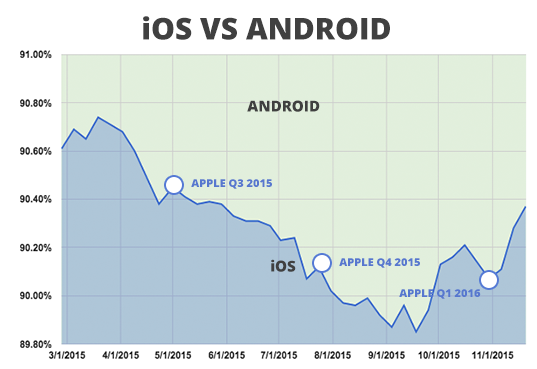