• The White House and the Centers for Disease Control and Prevention (CDC) will hold a one-day Zika virus summit with state and local officials next month to develop a plan to combat the virus in the United States. Health officials expect the Zika virus to spread locally in the U.S. in June or July. Doctors at the summit will share the latest science on Zika, including implications for pregnant women and strategies for mosquito control. Source

• The Office of the National Coordinator for Health Information Technology (ONC) proposed a new rule, which would impose greater oversight for electronic health records certified to Meaningful Use standards. It would allow them to review certified health IT products for information blocking, as well as potential risks to patient safety and public health. It would also give ONC increased power to regulate authorized certification-testing bodies. Source

Apple gained even more traction in the mobile device market among pMD's charge capture physician users, adding 0.03 percent this week. The feud between Apple and the government seems to be having a positive effect on Apple marketshare, with 32 of the largest internet, social media, and technology companies uniting behind Apple. 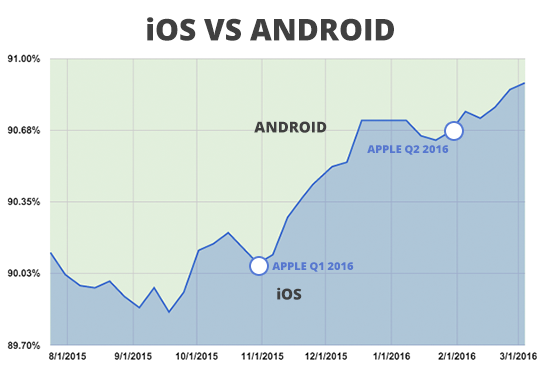