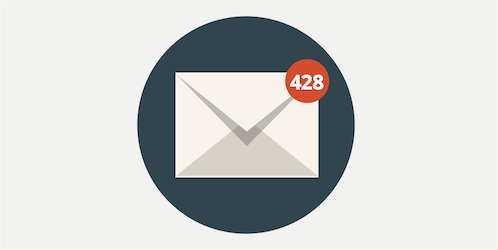 My friends all admit that they feel overwhelmed by work emails at least some of the time. A Google search on the topic yields headlines such as "Stop Email Overload", "Email Triage", and my personal favorite: "Clear Out Your Overwhelmed Email Inbox with the Nuclear Option". That sounds dire!

According to the Radicati Group, workers now send and receive an average of 122 business emails per day. As my email volume grew over the years, I started to find it challenging not to let emails get buried at the bottom of my inbox - especially those that I knew would take longer to address than a quick “yes” or “no” reply. Due to the number of meaty emails that I now receive during peak hours, the "Inbox Zero" approach isn't always a realistic option for me, so I've discovered a good methodology that works well for the high volume of emails that I receive every day at pMD:

• I treat my email inbox literally as an inbox. In other words, it is a place for incoming items only - things I haven't had a chance to look at yet and park in a more suitable place. I've spoken to people whose email inboxes instead resemble either a never ending to-do list, or worse yet, a giant bucket of all the email that they've ever received. The problem is that when your inbox grows too big, it takes an increasingly large amount of time and discipline to sift through it. Inevitably something will get lost in the mix. It's better to treat the inbox as a very temporary place where your emails can wait until they've been moved to where the work will actually happen.

• I read all emails as they come in. This helps me stay in the loop. While I'm reading, I archive emails that don't need a response from me, deal with anything that is a true emergency, and respond to any that can be addressed by a quick one-sentence answer. This allows me to stay more responsive than I would otherwise be on "quickies". The trick here, while reading fresh emails, is not to get sucked into responding to those that will require more time to address. It requires a certain amount of discipline, but it's important because...

• I work from the bottom of my inbox (oldest emails) towards the top. This removes the anxiety factor of thinking "I have 57 emails I need to answer!" to a much simpler, more calming proposition: I only have to answer the one oldest email. Then, when that's done, I can answer the one next email after that one. This also helps prevent the "layer of crud" effect, where time-intensive or difficult emails tend to sink to the bottom of the inbox and then get buried by fresher emails. Eventually they fall out of sight, but they are never truly out of mind, and they contribute to a sense of futility. If you habitually work from the top, then as soon as you start to hit the layer of crud, you'll feel inclined to throw in the towel because you know that the deeper you excavate, the worse the emails are going to get.

• I move to my calendar any emails that will require more than 10 - 15 minutes of work to respond to. I block out some time in my schedule to actually do the work, whether that's writing a lengthy email back to a charge capture customer or researching something before I can give a good reply. This gives me a sense of when I will actually be able to get back to the person, which in extreme cases could be a few days or more. Then after creating my calendar block, I reply to the original email to let the person know when I expect to have an answer for them, and at that point I can archive their email with peace of mind. I know when I'll be able to do the work to provide a good response, and the sender knows when to expect a reply from me. While I'm doing this, I sometimes realize that the time would be better spent in conversation with the person rather than writing an email, and in these situations I'll see if I can set up a call with them for the time slot that I'm already scheduling.

• I “snooze” my sent emails if they’re important, so I don’t forget to follow up. All busy people struggle with email from time to time, and I don’t like to rely on the recipient to track and organize my email. So after I send an important email, I snooze it until a date after which I would like to have gotten a reply. If the person hasn't responded by then, the email comes back into my inbox all by itself, and that's my reminder to follow up. I previously used a Gmail plugin called Boomerang for this, but since I switched from Gmail to Google's new Inbox software, I've taken advantage of its elegant built-in Snooze feature.