One of the goals of the pMD software development team for Q4 is to pay extra attention to new things going on in the software world around us, and to learn as much as we can from them. It can be easy to get caught up in just shipping the next feature without stopping to find out if there might be a new or better way of doing something. Not everything we read about, or hear about at tech talks, is applicable to us, but the education process itself has been really enjoyable.

As our team’s lead Android developer, one of my focuses has been on modernizing our Android application. I’ve been studying the latest Android UI trends, software design patterns, and Android development tools, looking for things I can apply here at pMD. To that end, a major task that I recently completed is migrating our codebase to the new official Android Integrated Development Environment (IDE), which is called Android Studio.

Android Studio offers a number of great benefits over the old set of tools we were using, and I’ve enjoyed setting up our codebase from scratch within the new environment. The biggest change is probably the build system, called Gradle, that Android Studio utilizes. Gradle is powerful, yet flexible, and uses Maven for dependency management. It’s going to help us more easily keep our dependencies up to date, and will also allow us to release different build types (dev, beta, production) with less effort than was previously required.

We’ll be benefitting from several other great features of Android Studio as well, including its updated set of virtual devices. These simulators allow us to run our app on a variety of virtual Android devices, so that we can catch any potential device-specific issues before we ship our software to customers. Android Studio also comes with a set of lint tools that help us identify and fix potential performance bottlenecks in the app that previously would have been more difficult to spot.

I expected that migrating our codebase to Android Studio would be extremely challenging, but it ended up not being nearly as bad as I anticipated. I think part of that was just because many of the new features have been a delight to learn and use. Overall, the project was a great experience, and I’m excited to usher the pMD Android app into a new era. 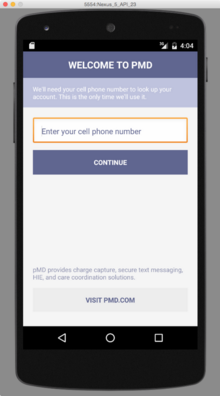