The biggest news out of Apple this week wasn't related to devices, but it did reinforce the company's long list of trailblazing. Tim Cook is the first CEO of a Fortune 1000 company to publicly say that he is gay. We're not sure if this is causation or correlation, but Apple devices among pMD's charge capture providers increased this week.

Apple has topped Android in net mobile devices for the week, adding 0.07 percent to its dominance among pMD's mobile charge capture providers. Many of pMD's health care providers use pMD on their iPhone and iPad, taking advantage of the larger screen real estate the iPad has to offer. Apple is still the top tablet manufacturer in the US and earlier this month they released the iPad Air 2 to glowing critic reviews. The iPad Air 2 is significantly thinner, lighter, and overall more powerful, making it a popular Apple mobile device for doctors to use for work. 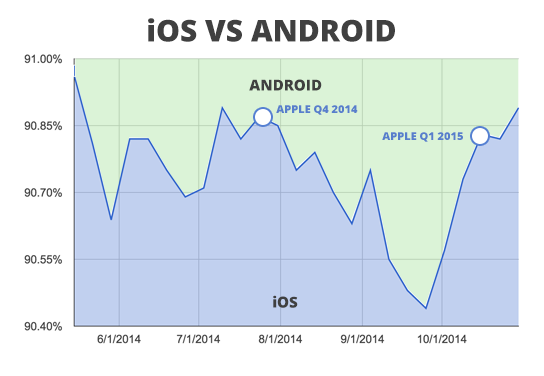