• The Office of the National Coordinator (ONC) released a five-year health IT strategic plan that focuses strongly on interoperability. It also emphasizes patient engagement and the expansion of IT to long-term care and the mentally ill and other areas of health care that have been without it. Source

• Medical school students staged a nationwide protest against police brutality by means of a white coat "die-in." Students for a National Health Program backed the protests, stating "We as medical students feel that this is an important time for medical institutions to respond to violence and race-related trauma that affect our communities and the patients we serve." Source

• CMS submitted a rule to require all hospitals across the country to recognize gay marriage. It's an important proposal (pun intended) for same-sex spouses to be afforded equal rights in medical facilities that accept Medicare. Source

In the Apple-Android device wars among pMD's charge capture physician users, Apple has fallen even further with six straight weeks of lost market share. What will it take for Apple to reverse this sinking trend? 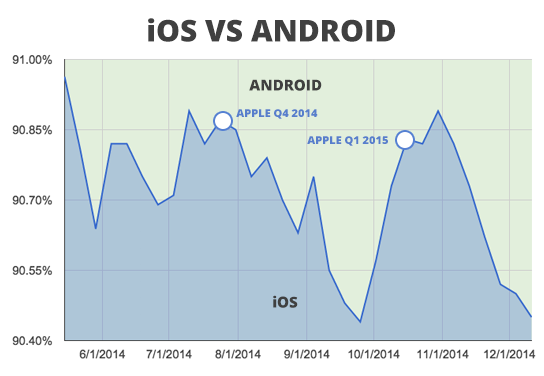 Each Friday, Signor Goat reports the latest from the week in health care alongside the front lines of the iOS-Android wars among pMD's charge capture physician users. Check back next Friday for your dose of our little medical corner of health care news.
Android Apple Health Care Mobile Health news technology