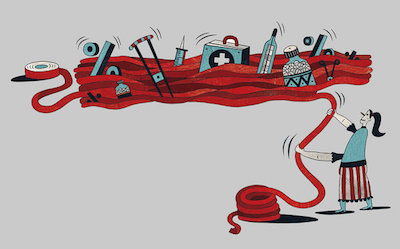 •  A new study reports that an increased risk of early death can be tied to proton pump inhibitors (PPIs), which are sold as common over-the-counter heartburn medication.  These PPIs have been linked to serious side effects associated with premature death.  Read More

•  The President's nomination for the next surgeon general is Indiana State Health Commissioner Jerome Adams, M.D. Adams has helped lead the charge in dealing with the state's opioid epidemic. His nomination must still be confirmed by the Senate but if appointed, he will serve a four-year term, replacing Vivek Murthy, M.D., who was fired in April.  Read More

•  If the current proposed health care bill becomes a law, it is predicted that 15 million fewer people would have Medicaid coverage by 2026. Some states have already begun to look for ways to tighten eligibility, with availability only for those who truly need it.  Read More

•  The Department of Health and Human Services is awarding $15 million for the families of Flint, Michigan affected by lead exposure. These earmarked funds will help residents who are experiencing health issues linked to the community's tainted water supply.  Read More

Each Friday, Signor Goat reports the latest from the week in health care. Check back next Friday for your dose of our little medical corner of health care news. Brought to you by pMD, innovators in charge capture software.
AHCA Health Care news