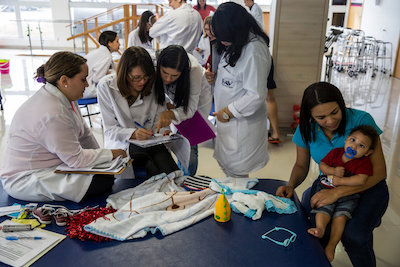 • The Centers for Disease Control and Prevention (CDC) released a report this week about a Nevada woman who died because the bacteria was resistant to every single antibiotic available in the United States. Dubbed as a "nightmare bacteria", Carbapenem-resistant Enterobacteriaceae, or CRE, is highly resistant to antibiotics. Recent findings indicate that CRE is more widespread than previously thought and that people may spread the germs even though they may show no sign of illness. Read More

• The number of uninsured Americans will increase by 32 million within a decade by enacting even a partial repeal of the Affordable Care Act. While most of the coverage reductions would result from the disappearance of individual mandate penalties, a mass exit from insurers from the individual market are also expected to play a role. Read More

• A group of prominent donors announced this Wednesday that they had raised almost $500 million for a new partnership with the Coalition for Epidemic Preparedness Innovations to tackle pandemics. New epidemics can be expected to occur regularly and spread quickly due to air travel, public health experts warn. Stopping them in their early stages will save lives and billions of dollars. Read More

• A.I. can be applied today to ever-expanding health data sets. Its many uses can be applied to settings such as clinical decision support, research data mining and analytics, as well as pattern classification for tasks such as tumor detection. One of many limitations to keep in mind, however, is that A.I. is only as good as the quality of data they are being fed. But hospitals holding off on A.I. might be missing out on the opportunity to help shape the technological advancements in health care. Read More

Each Friday, Signor Goat reports the latest from the week in health care. Check back next Friday for your dose of our little medical corner of health care news. Brought to you by pMD, innovators in charge capture software.
ACA epidemic Healthcare news